The Garfagnana is the area north of the Province of Lucca on the border with three provinces: Massa-Carrara, Reggio Emilia and Modena.

This position outpost of Tuscany Region toward the Emilia gives it a connotation of “hinge area” of considerable strategic as a point of contact between the different territorial and administrative with their cultural traditions, resources and historical background.

From the morphological point of view the area is structured around the river system of the Serchio and the mountain systems that merge, ie the Apuane and the Apennini, characterized, in turn, by deep valleys formed by watersheds secondary tributaries. 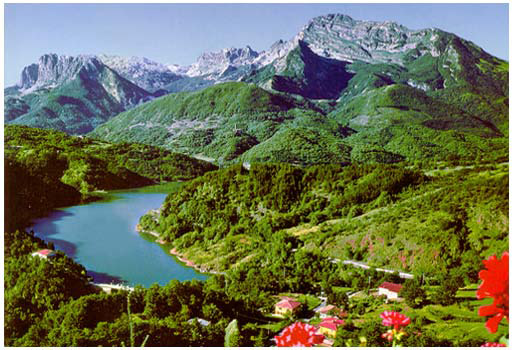 The Serchio, with its two branches the original one and the other Apennine Apuan, crossing the provinces of Lucca and Pisa and flows into the Tyrrhenian Sea, resulting in a catchment area identified, among others, by Law 183 / 89 as experimental pilot basin for the reorganization hydrogeological and environmental, as well as for the use and treatment of surface water and spring.

The ridges Apennine and Apuan, characterized respectively by profiles sweetest and the first step, more pronounced and tormented the second, are the interface respectively with Emilia (provinces of Modena and Reggio) and the Versilia.

The two mountain ranges are welded to the head of the valley in the Monte Argegna and Carpinelli Pass giving rise to a saddle that separates the Garfagnana from Lunigiana. These chains are reliefs of all respect; in particular the stretch of the offers with the Mt. Prado for the largest share of the entire region with its 2054 meters above sea level, but the whole ridge is characterized by mountains exceeding 1,800 meters above sea level widely (Old Mt. 1982m, Mount Cella 1946m, Mount Sillano 1847m).

Garfagnana offers visitors several opportunities: walking in the nature (in the woods and mountain paths); visit castles and medieval villages; taste specialties made ​​from spelled, chestnuts, mushrooms, cheese and cold cuts; appreciate the peaks, cavities and tunnels of the Apuan Alps.

The configuration of the land, full of hills, woods and valleys is suitable for a vacation for the whole family or with friends, relaxing, adventure and discovery of landscapes that leave you breathless.